To Vaxx, or not to Vaxx? 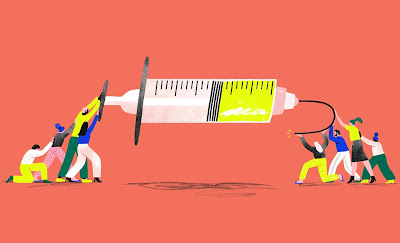 I have been both stunned and even hurt by the reactions of family members, friends and acquaintances when I tell them I will not be getting the Covid vaccine. I have been criticized, ridiculed and even called names. I have been told my choice is foolish, and that I am being selfish. One friend flippantly suggested I probably also thought the world was flat; another had the chutzpah to tell me my choice was detrimental to all of humanity.

The near total complicity with which my friends line up for the vaccine disheartens me. It matters not what I say, my stance is dismissed as being unequivocally wrong before I am even given a chance to make my case. When I defend my position it falls on deaf ears; minds are closed. Most of the same friends (myself included) used to be dumbfounded with how one could not reason with a Trump supporter. Now, the same friends are the ones who cannot be reasoned with. Most tout science. Many say that everyone must get vaccinated in the interests of public safety. A few have even insisted that it is my duty as a human being on Planet Earth to get the jab/jabs.

As my friends’ opinions ring in unison I am reminded of General George S. Patton’s famous words, “If everyone is thinking alike, then somebody isn't thinking.”

I consider most people I’m close with to be critical thinkers. Most I know do not trust our government, knowing that it is owned by the corporatocracy and that it no longer serves The People. Most I know are critical of Big Pharma, seeing the industry for what it is: a profit-driven beast dancing the fine line of peddling drugs at unjustifiable prices and criminal activity. Most I know have serious doubts when it comes to the mainstream media, knowing that it is corporate-owned (90% by six corporations) and that independent investigative reporting has become a lost art.

Now, all three of these (otherwise suspect) entities are in lockstep with regards to the virtues of the vaccine. Even America’s bankers and agents of Wall Street (Jerome Powell and Janet Yellen) sing the chorus. My friends no longer question the entities they used to question; their critical thinking is nowhere to be found. My liberal friends, previously pro-choice, now claim to know what is best for my body. Gone are the words Big Pharma and in its stead a new word/euphemism for the times - science.

“I trust science!” I have heard people proclaim with near glee on more than one occasion. It is truly mind-boggling, they defend science as it were the love of their lifetime.

Never in my life have I ever heard the words “I trust Big Pharma!”

I respect what I read about Covid as a disease, there is a severity to this flu unlike with flus past. I take precautions throughout my day. I take supplements and herbs to boost my immune system. I wear a mask with no resistance, not knowing even where to begin when it comes to the mask debate. With the CDC and Anthony Fauci both having flip-flopped positions on masks since this whole thing began I cannot make sense of this. How could anyone?

I avoid the hype of websites bent on conspiracy theories. I don’t buy all that they are selling. I don’t buy all that the mainstream media sells either. I do however find it telltale that anyone who goes against the mainstream narrative has already been discredited by the transmitters of the narrative. They’ve developed the talking points and counter points to every possible objection.

Still, my main concern is that the vaccines were rushed to market. One need look no further than the more than 20 countries that have halted the use of AstraZeneca vaccine in the past few days as evidence of such. Meanwhile both Pfizer and Moderna have been floating the idea/trial balloons that three jabs/doses may be needed. Products that had been adequately tested would not need to be suspended, or be subject to shifting directives. How will you feel if you are a recipient of the Pfizer creation and 18 months from now the company says a fourth “variation of the jab” is needed? Such could be considered farfetched ... and it is not beyond the realm of all possibilities.

As best as my non-scientific mind can piece it together a vaccine contains some of the viral antigen (usually a part, or ‘attenuated’ virus). The idea is that the body gets a smaller dose to react to, and builds up an antibody response to the vaccine, which then kicks in when faced with the actual virus in the real world. The mRNA ‘vaccines’ contain no attenuated virus or even viral particles. Rather, they are gene therapy, using genetically modified strands of mRNA designed to “hack” one’s DNA and teach it manufacture antibodies, thus bypassing the actual pathogen.

Why would I choose a Big Pharma concoction to do for my body what my body is naturally designed to do for itself? Could the modified strands of mRNA alter our G-d given and innately brilliant immune systems in ways that might not be known until more time passes … and subsequent illnesses are to surface?

I believe that is the greatest of all of the unknowns.

Such is preposterous. A vaccine (a treatment to produce immunity against a disease) provides immunity (resistance, protection and/or exemption to a particular infection or toxin). If the Covid vaccines were true immunizations then it would not matter if a vaccinated person was in the close company of someone vaccinated, unvaccinated, or even outright contagious.

To vaxx, or not to vaxx?

The reactions of my family members and friends compelled me to further research my position. Now, I am only more aligned with my decision. More time is needed. Too many unknowns remain. The harbingers of us knowing that we do not know all there is to know should not be ignored.

Still, the fear-laced drumbeat of the suspect entities continues, directing all to get vaccinated without delay.

Still, and just as I did when the orange-haired man was in the Oval Office, I cry “Resist!”

And never, ever, ever stop questioning the narratives of our times.

Add comment
Load more...
Newer Post Older Post Home
Subscribe to: Post Comments (Atom)
My name is Robert M. Hamburger, and this is my stand. A place where I share food for thought and humanitarian ideas from my perch, high up in the Rocky Mountains. I have lived off beaten path and away from much of the stimuli of Western civilization for the past 22 years. Every day I walk, hike, ride my bike or ski with my dog several miles into the wilderness from my door. Being on the outskirts of mainstream life has been one of the most rewarding choices I have ever made. Politically I am an outspoken, free-thinking, label-defying, green/libertarian, natural law, humanistic, frustrated revolutionary. Professionally I trade the gold and silver futures markets for both myself and clients as well as advise people in their lives and businesses ... and in particular for the need to own gold and/or silver.
"Our lives begin to end the day we become silent about things that matter."
--Martin Luther King, Jr.
Not on social media. Please write me at: hamburgersstand at gmail dot com.